When you read about poker these days, given the explosion on the Internet over the last 10 years, you could be forgiven for thinking that it’s a very confusing business indeed with endless variables to take into account – and many different potentially winning strategies.

This is “kind of” true but it also helps to remember that it all boils down to two basic opposing strategies and all other ways of playing are, basically, mixes of these two.

Also, this holds true for all types of poker and, in fact, all other card games and games of chance where a large element of judgement is involved. But it’s fair to say it’s truer in poker than with any other form of gambling.

Broadly speaking; at one end of the spectrum, we have the percentage player. We’ll call him ‘Mr Steady’. Mr Steady studies probabilities and has an in-depth knowledge of poker. He’s likely to weigh possibilities continually, placing bets carefully, folding when the odds don’t favour him – and rarely (in fact; let’s make that ‘never’…) going all-in unless, of course, he’s holding a Royal Flush. 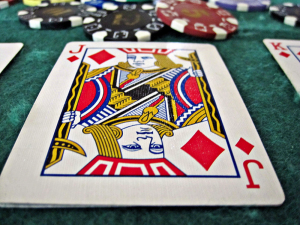 Mr Steady rarely wins tournaments outright – but he’s almost always there or thereabouts, with a steadily high finish. He also makes a steady profit at the game and always (no matter how much effort is involved) takes absolutely full advantage, down to the last penny, of every introductory or on-going bonus he can for online play. So with the most generous offers around from casinos like 32Red and others, he’s right there.

If you click here for the 32Red casino, you’ll quickly see what we mean and why it’s a great starting point for percentage players.

He’s a real bluffer – often going all-in on the flimsiest of premises. He tends to scare other players as they know he’ll play to the limits. It doesn’t take them long to work out that he could be holding aces or he could be holding absolutely zip – but trying to decipher which it may be is a scary prospect. Mr Swashbuckler often wins big, often loses everything he has brought to the table with him – and is often the winner or the first to exit during tournament play.

These two extremes sum up the overall basic poker strategies people tend to follow. Of course in practice, most people play a mix of the two (and sometimes quite deliberately so to help befuddle their opponents). Also – a lot depends on mood; sometimes people play more of the Mr Swashbuckler role than the Mr Steady – though they may change the next time they play.

But we all know who wins out in the end; and here’s a clue – who won the race, eventually, between the tortoise and the hare? But who had most fun en-route?

You may have missed

Most Realistic Forms of Gambling to Become Professional in